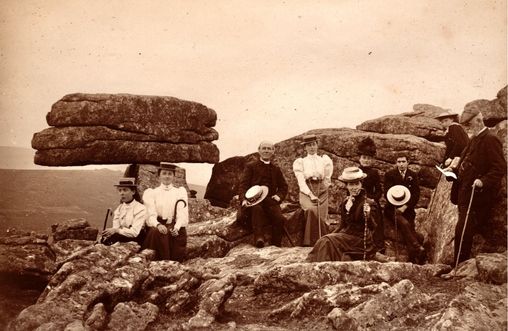 It is rare that we get such a perfect opportunity to discuss our local area as the one that presented itself to us last week: Being situated at the ‘Gateway to Dartmoor’ in Bovey Tracey presents the very lovely chance to look in on us here at House of Marbles for a shopping/eating/family-fun stop, while in the same day exploring the natural rugged beauty that lies beyond the vast coastline Devon has to offer it’s many visitors.

It is this area that we speak of today – the stunning landscape that is Dartmoor National Park. As a little background, Visit Dartmoor is the local Destination Marketing Authority & tourism delivery partner for Dartmoor National Park, bringing ‘Grockles’ (that’s the Devonian term for tourists if you don’t already know) and locals alike, to the area. Understanding the importance of championing our home collaboratively, we at House of Marbles are members of not just Visit Dartmoor, but also Visit South Devon & Visit Devon too, and it was at a recent Visit Dartmoor members event we learned of the fabulous phenomena that is a Logan Stone.

Logan rocks or stones are essentially moving stones on Dartmoor – and obviously right up our street as the eternal champion of ‘moving stones’, in all it’s forms. Logan Stones appear to be natural – a case of one stone stacked on another where over-time weathering has occurred in such a way that a joint of sorts has formed, allowing the top stone to pivot and move without the risk of it toppling. It sounds rather like a game, does-it-not? In any case, the link to this fabulous culmination of all-the-right-conditions came from one of the most unexpected places – a short history on Buckfast Abbey as the venue for Visit Dartmoor’s 2022 Tourism Day.

Buckfast Abbey it seems is as rich in history as our beloved Bovey Tracey Potteries and as a summary of the link made by Buckfast Abbey Warden Geoff Pring between Dartmoor and the Abbey is thus: The origination of our nearest Monastic centre began in the times of King Canute in the year 1018, when records of land gifted for the purpose of religion were maintained (You can read more about this in detail here). At some point within the thousand years between then and now the originally Benedictine site (Benedictine meaning that monks dedicate themselves to one site for their entire lives, rather than being nomadic with the potential to move to other monasteries) lost its patrons only to later become the home again of Monks exiled from France.

The connection was only made after these French Monks had set up residence in their new cloisters and began building the current Abbey that stands today. The site from which these exiles had come was a place called ‘La Pierre Qui Vire’; Pierre being the French version of Peter, and Peter being the Apostle Jesus named his ‘Rock’, with the relevance of the disciple’s synonym then being linked back to the moving stones on Dartmoor called Logan Stones.

Now then, to the juicy parts that were really rather interesting! While the Abbey today is as grandiose at you might imagine, it is also surprisingly modern, having been completed only in the 1900s having paid for the building work peace-meal as-and-when income would allow, and borrowing significantly too. The construction occurred SO recently in fact that the technology existed to record footage of the building work (in black and white and without sound) and at that time it was of interest such-to-the-extent that people would travel from all over to come and get a glance. This is because it could easily have been termed a modern-miracle (if you believe in such things) because aside from their dedication to their religious sect, they were a group of men who at the outset had no building skills or knowledge from which to begin to tackle the challenge of constructing such a structure.

The priory raised enough money to send one monk away to become trained as a mason so that he might bring back those skills to share. Even with this knowledge it still took 32 years to complete. Suffice to say that health and safety was nearly non-existent (another comparison that might be drawn to the rich and interesting House of Marbles pottery-making-history) but while you might expect the story of the Abbey’s construction to be littered with a deluge of horrid accidents, you’d be surprised to hear that there were just 4 life-threatening incidents within the three decades of building work, none of which lead to a fatality!!

One monk fell 50 feet into what happened to be a pit of sand that broke his fall and saved his life, and in homage to the extraordinary incident he later used to stand in the very-same spot to uphold his daily prayers. Another 3 fell in lived to tell the tale. Due to the way that the build was funded, it became a site for productivity (outside of building and prayer times) ensuring it’s modern-day existence, with many branches of varied income streams available to fund future progress. The well-known Buckfast Tonic is one product that can be found all over the world today – again, much like our beloved marbles and other House of Marbles products.

Nowadays things at Buckfast Abbey have modernised to the extent that services are streamed online, which came in handy on the 1000th Anniversary when the televised. House of Marbles cannot boast to be as modern as this, and nor would we want to be with our nostalgic-uniqueness remaining at the core of who we are, but we always love to champion local connections to the area, old and new. That eclectic mix is, of course, what makes our Devonian Heritage just so enticing for the hoards who grace our isles annually to discover a piece of the good life on their escape from normality, and long may we welcome them.