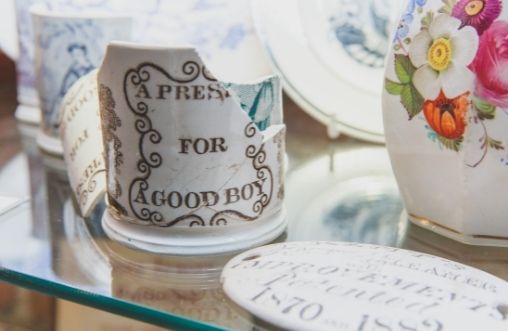 If you have ever visited us in Devon, you may have wondered why we have a Pottery Museum.  The reason is simple – the buildings that House of Marbles occupy are referred to as ‘The Old Pottery’ because it is located at an historical site of pottery making.

Pottery has been made in the immediate Bovey Tracey area for thousands of years, but the opening of coal pits in the mid 1700’s allowed commercial exploitation of abundant mineral wealth in this land of clay. The range manufactured was diverse and the local industry was a microcosm of national trends in pottery making, the products of which were sold all over the UK and overseas.

Some of the most interesting facts about the history of this site are that Josiah Wedgwood himself once visited in 1775.  His visit was met with much trepidation by the then-owners, who were known to have hidden any Wedgwood replicas being made. Although not wholly original or unique in design compared to Wedgwood pottery, the blue & white patterning is so iconic and was a popular item being produced at the time,

Another great fact is that Wemyss Ware was once produced in Bovey Tracey, contrary to the popular belief that this favoured range of pottery (particularly animal ornaments), was only ever produced in Scotland. The reason for this is that while Wemyss Ware originated in Fife, the rights to it were purchased by the Bovey Pottery Company.  The head Wemyss Ware decorator Joe Nekola, moved to Bovey Tracey and continued using their unique painting techniques which were so readily identified and particularly popular in the late 20th Century. The rights for production have since moved back to Scottish territories, but even so, this brief home to the popular collectors’ pottery marks its place in history.

A lasting legacy on the site is the remaining array of buildings, which are home to House of Marbles’ Shop, Glassworks, Old Pottery Restaurant, Games Garden, and the courtyard dining area.  This area is dominated by 3 bottle kilns – a distinct feature and an ever-present reminder of the past. Today there are only two sites in the UK where these kilns remain, (also referred to as muffle kilns), the other being at Gladstone Pottery Museum in Stoke-on-Trent. As they are of such historical interest and considered to be heritage assets they are protected and listed as Statutory Ancient Monuments by English Heritage.

Although House of Marbles flirted with the idea of producing pottery once more in the 1990’s, after a brief period of renewed production, they decided to focus solely on producing toys and games. The company’s last pottery production run is on display in one of the kilns, viewable from the outside dining area of the Old Pottery Restaurant. Some may find it interesting to know that this includes some ‘Coronation Street‘ pottery memorabilia.

There are many other interesting artefacts and exhibits in the Pottery Museum including a model of the original site with the buildings that still exist today, marked for reference.  It is also home to the Bovey Pottery Company’s wooden fire engine. Despite its age and the amount of use it must have seen over the years the fire engine remains in surprisingly pristine condition, although it shall never be used for its intended purpose again. Other articles you will also find on display include Naval wares, personalised children’s plates and cups, wartime crockery, statues and even the odd toilet! Historical digs and pottery making items can also be seen alongside portraits of past staff and owners, with models of the early developments of pottery, creating a picture of this important industry.

In order to appreciate it fully, you need to visit the Pottery Museum in person.

We hope that this brief insight into the museum and its history will enhance your visiting experience.

For more information about the Bovey Potteries: