Our Marble Museum may be one of the most unique museums you will find on your travels. Inside is a collection of highly collectable marbles from across the ages, including examples of early materials such as clay and stone, as well as glass marbles that have been dated back as some of the oldest found in existence. 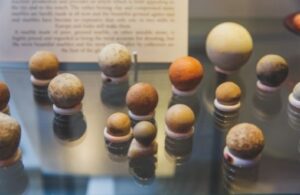 Although glass is the main material you will picture when you think of marbles, it is one of the later materials used in marble production, because it was less accessible to the average family and most likely more expensive initially. Interestingly, nuts are known to have been used to play marble games in the Roman empire, even before marbles were invented. Glass gained popularity because, unlike its clay (or nut) equivalent, it proved to be more durable in play and was very pleasing to the eye as well, having more scope for different designs.

The very first glass marbles made were called ‘end of day’ marbles as glassmakers would gather up the last of the glass they had been working with at the end of their working day and roll it up into balls to take home for their children to play with.

While there are many, many different styles of marble, of which Cat’s Eyes are perhaps the most well-known, the more collectable marbles tend to be the rarer ones, including those made for promotional use by companies such as Coca Cola, or those which contain a sulphate figurine, examples of which can be seen in the museum.

As well as one of every marble ever produced by House of Marbles, there are other fascinating exhibits in the Marble Museum, including our HUGE set of 3 marbles made out of, well, marble, plus a range of bespoke marble runs, created for us by Swiss artisan Alex Schmid. 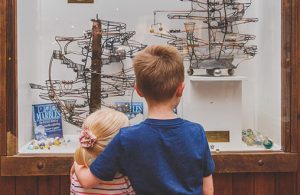 Explore a little further than the Marble Museum itself and you will find our site’s most glorious marble run – Snooki – in the upstairs shop. Snooki is so called because it is so large that it uses snooker balls in place of marbles.

It is also worth a detour to our Games Garden to see the huge floating marble, suspended on a bed of water, and generally speaking it’s always worth keeping your eyes peeled wherever you go at House of Marbles, because there is sure to be a quirky feature in every nook & cranny!